← A Ranger Christmas, Part 3
Mister Scrooge to See You, Part 1 →

So now that the bad guys have been wounded-but-not-killed, the Hooker with a Heart of Gold hands the baby over to Cooper.  Cooper claims that “the weather doesn’t look too good,” and his solution to this problem is to start back to the Cratchit ranch immediately, instead of spending the night in town in the arms of the lovely lady.  (That said, they sorta kinda hint at possible romance in their future.)

By the way, Cooper just trots off on his horse, cradling the kid in one arm. 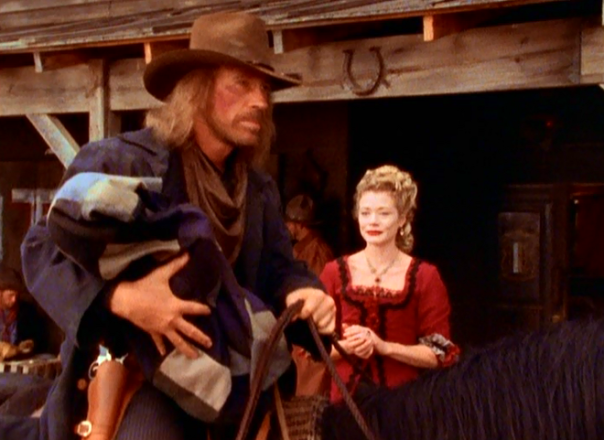 Baby carseats of the Old West!

Now, Cooper really has nobody to blame but himself when the “weather” forces him off the horse to walk it.  I’m not sure what’s supposed to be happening, but it honestly just looks a little breezy.  Still, Cooper is scared for the baby, and prays for it, as is the Wintermas custom around here!

“Lord, I never ask you for anything.  But I’m asking now, not for me, but for this baby and his parents.  Lord, please, please help me get this baby home.”

And JUST AT THAT MOMENT, the clouds part and the Christmas Star appears. 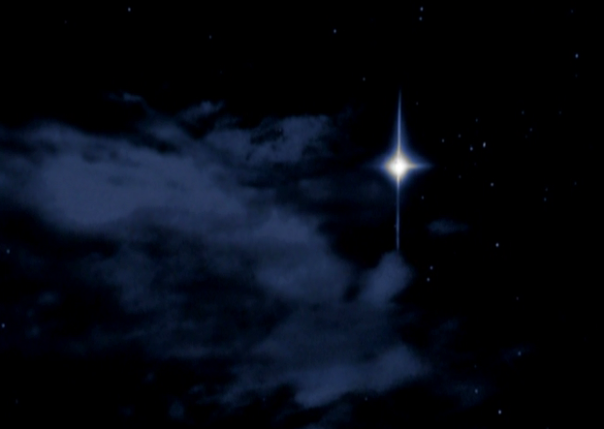 And the star leads him to Bethlehem, Texas.

I honestly can’t decide for myself whether that is cute or stupid.  Maybe it’s both.

Cooper finds yet another saloon, and asks for milk for the baby.

Well, actually, he demands it:

Yeah, the spirit of Christmas is really working in him.  What’s the magic word, Cooper?

And what, the HHG didn’t give him any for the trip?  Man, some heart of gold!

But it’s okay, as Cooper transfers care of Tiny Tim from one whore to another.  Being a man, he of course has no idea in the world how to feed a baby, and one of the whores volunteers.

Bet Mrs. Cratchit will be thrilled to hear all about this later!

Speaking of, Cooper gets Tiny Tim back to the Cratchit ranch first thing Christmas morning!

(Man, good thing he risked carrying Tiny Timmy through all that “weather.”  Because otherwise Timmy would be back on December 26th, and that would have been just plain wrong.)

Filled with the spirit of Christmas as Cooper now is, he manages to deliver the kid in the most dickish way possible: he walks in and holds out a goose and some presents, and Mrs. Cratchit stares at him in concern for a moment, because he’s not holidng her gorram missing baby…until Cooper spins around to reveal Tiny Tim was strapped to his back the whole time!

Dude, just walk in and hand off the kid—why drag it out?  I mean, hasn’t this poor woman been through enough, married to E.B. Farnum and having her baby kidnapped?

(Though I understand that’s standard procedure when the F.B.I. rescues any baby from a kidnapping: “So, folks, here we are!  Maybe we saved your child and maybe we didn’t…TA-DA, WE DID!!!  SURPRISE!!!  Man, we really had you going for a minute—bet you though your precious child was dead!”)

The Cratchits thank him, as well they might, since they had absolutely no plan whatsoever to get their kid back until Cooper showed up, and Cooper thanks the Cratchits in return, “because I finally realized that Christmas is real.  As real as that baby.”

That’s kinda a funny way to put it, Cooper.

And he adds that he kept the promise he said he would try to keep: not to kill anyone.  I wonder if Mrs. Cratchit is disappointed.

Back at the orphanage party, Walker Texas Ranger tells the kids that Cooper explained everything to the judge, who dropped all the charges against Bob Cratchit.

“Praise the Lord!” calls out the kid who doubted Christmas.

So we see that the Doubting Thomas boy doubts no more.  Too bad about him not getting parents for Christmas, though.  Oh, well.

And then the cast breaks the fourth wall and wishes everyone a Merry Christmas and Happy New Year, out loud and in sign language.  I think a lot of shows did this over the years, actually.

So, a guy who wasn’t that into Christmas and was going to do the right and heroic and lawful thing anyway…did that thing.

Thus proving that Christmas is real.  Or something.

I wish I could say our next offering is more coherent, but…well, I’ll let you guys be the judges.

Posted on December 6, 2015, in A Ranger Christmas. Bookmark the permalink. Leave a comment.

← A Ranger Christmas, Part 3
Mister Scrooge to See You, Part 1 →