Well, I busted through the last bit of The Edge of Darkness (though Michael Murphy deserves no better!) and am actually on schedule for this year’s War on Wintermas romance read… 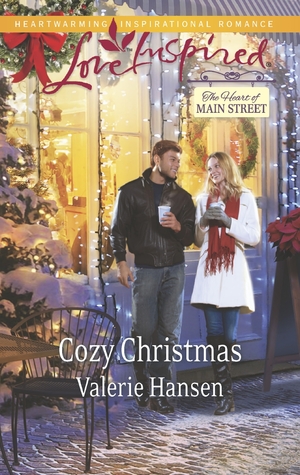 The cover is just too cutesy, with the couple with the dopey grins standing in front of the world’s most decorated storefront, as well as a chair that nobody would sit in at this time of year.

In keeping with my entire history of Wintermas reads, I am tackling this blind, chapter by chapter.  So we’ll have fun discovering it together, and I have no idea how good the book might be.

In keeping with recent history (as in, last Wintermas), this is the final book of a Love Inspired miniseries.  Last year, we had the world’s most horrible will, and a group of cousins who had to come back to their crappy small town for a year to get money and land.

This year’s series involves a failing small town in Kansas.  The local Big Business that kept the town afloat closed down permanently, and people were left in the cold (har, it’s Christmas).  Many who can have up and left.

But then, some anonymous benefactor bought up a whole block of Main Street and then paid for a bunch of businesspeople to set up their small businesses in those buildings.  Which actually sounds kinda cool until you realize two things:

Now, at this point, I’ve only read the first chapter of this book, and the first chapter of the second book of this series, so I could get a better handle on this deal than I had on Grandpa Asshat’s will last year.  (I’ve got both the first and second books of the series from the library, for reference.)  So the interesting part is that while I haven’t really seen my first point be a thing yet, my second point is.  Like really a lot.  This isn’t even subtext, it is actual text.  In fact, it kinda looks like the entire central conflict of the second book is that the heroine moves to town and opens a bakery, and the hero is resentful because he wanted to open a business, but couldn’t because he’s not allowed in on this deal because he’s a local.

So yeah, it is super weird and, just like last year, I don’t envy the author her task here, because not only is she writing her own story, she’s tying up the loose ends of the whole series; specifically, who is this mysterious benefactor?

Our heroine is the person who is supposed to figure this out: Whitney Leigh.  She’s a reporter for the Bygones Gazette.  So, to be clear, she works for a local newspaper in a failing small town.  But she kinda acts Too Cool For School about it: she spends most of Chapter One internally whining about having to write fluff pieces about all the romance in the air as all these businesspeople on Main Street keep falling in love.  And what she really wants is to find out who the benefactor is.  She seems to see herself as an intrepid journalist who will break the biggest story of the century, and I’m mildly annoyed by her attitude…but then again, this is the big secret that the book needs to reveal, and it’s just a Chapter One exposition-dump, so I’ll give it a pass for now.

(Also, she’s very much on the side of the townsfolk and kinda pissed (being a local herself) that locals don’t get to be a part of the Save Our Streets (SOS, get it?) initiative.  So points for her in that regard.)

The opening chapter features Whitney heading to the Cozy Cup Cafe, a SOS business run by our hero, Josh Smith.  (Bizarrely, he’s Josh Smith in the book, but Josh Barton on the back cover).  Josh is perfect wish-fulfillment material so far: handsome and sweet, he runs this awesome coffee shop that miraculously appeals to both older locals who chill all day and gossip, and teens who hang in his “internet cafe.”  (This series is from 2013.)

But since I’ve also spent this post in exposition-dump, I’ll leave their conversation till next time.

Posted on November 23, 2018, in Cozy Christmas (In Progress). Bookmark the permalink. 13 Comments.